This year will take place the 36th edition of the International Far East Football Tournament  (far-east-tournament.com) also known as GAS tournament (German All Stars Tournament ( gasbkk.com ) as its organised by the German All Stars Bangkok, this year’s event marks a special celebration as it’s the club’s 50th year anniversary since it’s inauguration in 1968.

On the weekend of April 21st and 22nd 2018, a total of 46 teams will join to compete in three competitions. Once again, the tournament runs at full capacity with several teams on the waiting list.

The International Far East Football Tournament has undoubtedly become the highlight in the international football calendar in Thailand and throughout Asia. Next to teams from Thailand, the German All Stars are happy to welcome friends from Singapore, China, UAE, Malaysia, France, England, Switzerland, Vietnam, Africa and many more. It’s also great to see that the majority of teams have participated for many years and visit us again in 2018. At the same time, we’re happy to meet new teams competing in the tournament for the first time. 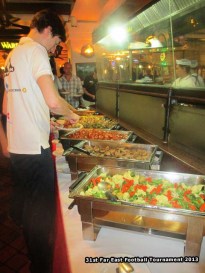 Every year, the official opening of the event takes place at the Captain’s Dinner on Friday night before the tournament. All team captains plus another team member per team are invited to join the Captain’s Dinner at 7pm on Friday, 20 April 2018 at a Deutsches Eck on Sukhumvit Soi 20. The team captains are invited to join a full buffet with German delicacies including imported brewed specialties (not more than two reps per team).

We arranged that also all other team members are invited to join the captain’s dinner at the outside terrace where they can follow the drawing of teams via live video screen. Expenses have to be covered by the participants themselves, but special prices for German beers are offered

This site uses Akismet to reduce spam. Learn how your comment data is processed.